The twitterverse was ON FIRE.

Snippy-snarky comments about Ken Ham or Bill Nye, links to related articles, quotes from the speakers …. I stand amazed in the presence of all those who can listen to a live event, be funny and do research simultaneously.

And in the middle of it all, this tweet:

Bored of this…can’t we just say God did it and get about feeding the poor?

Why should we care?

Ken Ham, with the home-field advantage of his Creation Science Museum,

challenged Bill Nye (the Science Guy) to debate this proposal:

“Is creationism a viable model of origins in today’s scientific world?”

I did not have high hopes for this debate – Nye can be snarky and Ham can be smug. Fortunately, both reined it in. (Ham did deliver his signature line “where you there?” or its counterpart “you weren’t there” innumerable times, but without dipping it too deeply in smirk).

Nye, a science advocate, has been outspoken lately about teaching creationism to children. It is theists, specifically evangelicals, who are drawing the battle lines in state houses and with textbook companies. In order to stop those battles (which Nye wants), the hearts and minds of evangelicals must be won. Bill Nye is Not That Guy.

Ham spoke first and immediately his game plan for the debate was apparent. In slide after slide and point after point – through opening remarks, rebuttal, and Q&A time – belief in young earth creationism was equated with

Ham also equated belief in evolution and an old earth with atheism. In a Freudian slip, Ham used the word “secularist” instead of “evolutionist” during one of his rebuttals.  As an aside, Ham stated that Jesus is the way to salvation not young earth creationism, but overwhelmingly his arguments stated otherwise. (Ham has written previously in his blog that a specific Christian evolutionist theologian was categorically “not evangelical” and doubted that he was a Christian in any sense.

Regardless, in the debate Ham unequivocally defined Christianity by a belief in young earth creationism.

From the center of his 6,000 year-old-universe, Ham drew a line in the sand: Choose science or choose God.

And across the internet, like the residents of Whoville yelling and whooping with big banging noises trying to make themselves heard to the outside world, millions of Christians were shouting “It doesn’t have to be that way!”

Yes it does, Dr. Giberson, yes it does.

My favorite quote of the night came during the Q&A time in a question posed to Nye: “Is there room for God in science?” Nye said this:

The head of the National Institutes of Health is a devout Christian, there are billions of people in the world who are devoutly religious, they (science and faith) have to be compatible because those same people embrace science. The exception is you, Mr. Ham.

Props to Nye (an agnostic) for acknowledging premier top-of-their-game  scientists who are also devout Christians.

Props also to Nye for his dogged adherence to the debate topic. Throughout the (almost) three hours Nye prefaced his evidence and his arguments with the debate proposal: is creationism a viable model of origins in today’s modern, scientific era? Nye consistently reminded Ham and the audience that the value of a scientific model is its ability to predict and repeatedly asked Ham what the creationist model is able to predict.

The weakest point in Nye’s debate was his argument against a worldwide flood premised on the inability of an ancient shipwright to build a flood-waters worthy vessel of the magnitude described in Genesis. Again, Nye is not a believer, much less a theologian. There is strong evidence against a world-wide flood and “flood geology” (which Nye presented), but his discourse on ancient shipbuilding confounded his points.

Here are my highlights:

Ham had a three hour window of opportunity to lay out a science-evidenced-based rational for a young earth creationism model (as indicated by the debate topic). Instead, Ham spent the vast majority of his time in his initial presentation, his rebuttals, and the Q&A making the case that evolution and an ancient earth cannot be reconciled with belief in the Bible and the authority of God.

As a result, a lot of time was spent in philosophical discussion, with Ham saying you can’t believe in God and evolution and Nye saying well I know lots of people who do. 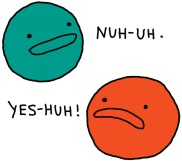 Here are the primary points Ham made regarding creationism as a model:

Nye’s primary points as to why creationism is not a viable model:

I read through my favorited tweets from the debate. If you don’t want to watch the entire thing, I think these three sum it up quite nicely:

@peteenns: Ham comes clean: if Gen 1 is not literally true, the Gospel falls apart. Enter theologian please to help Ham with this. #nyevsham
@BrianZahnd: If it had been Francis Collins talking by himself for two hours I would have watched. #NyeHamDebate
@Arumi_kai: I kept waiting for Neil Degrasse Tyson to burst through the wall like the Kool-Aid guy and set up a third podium. #creationdebate

I believe that the heavens declare the glory of God.

I believe that day after day the cosmos pours forth speech and night after night the cosmos reveals knowledge.

I trust that the evidence and knowledge that is revealed is true because the Creator of the cosmos is Truth.