I wrote my first letter to a politician this week.

I wrote Dan Patrick, the leading candidate and likely winner in the run for Texas lieutenant governor. I told him that I want Texas to lead in science, medicine, and technology. (In Texas, the lieutenant governor is a legislative leader capable of powerful influence on policy, including public education law).

Mr. Patrick: how can Texas lead if our science classes discard the very basis of modern biology as well as modern physics and geology?

I’m still waiting for a reply.

Science is one of the few things in life unaffected by politics ( p. 167) – there is no such thing as a Democrat Krebs cycle or a Republican explanation of DNA replication.

Even when there are ethical or moral or political issues regarding how science should be applied, the underlying science is unchanged: those who want to ban stem cell research do not claim that stem cells do not exist; those opposed to nuclear weapons still accept atomic theory.

Social sciences, however, are a different story.

In his best-seller The Closing of the American Mind (1987), Allan Bloom scathingly critiqued American higher education. America’s most highly regarded virtue (according to Bloom) is openness.

Academia, specifically in the social sciences, has declared that all customs, all cultures, all philosophies, and all ideas are worthy of consideration. Evidence is not important; reason is not important. The greatest danger in social sciences is not error, but intolerance. If I make a judgment on the basis of evidence, I am not “open” to other ideas and interpretations. According to Bloom, the American mind is closed because it is (ironically) too open.

The point is not to correct the mistakes and really be right; rather it is not to think you are right at all (The Closing of the American Mind, p.26).

When Bloom published in 1986, he exempted the natural sciences from this trend. Bloom found natural scientists to be ruggedly devoted to empirical evidence, to their use of nature as the ultimate standard of proof:

It (natural science) is really self-sufficient, or almost so…. Natural science does not boast, it is not snobbish. It is genuine.

And I love this declaration:

Natural science simply does not care.

Natural science is the honey badger of academia.

In 1998, the Discovery Institute (a creationist think tank), guided by University of California – Berkley law professor Phillip Johnson, outlined a strategy designed to overhaul the way science is “done”. To Johnson and the Discovery Institute, modern science was anti-religion. This strategy, essentially the “playbook” for Intelligent Design/ creationism, was called “The Wedge” by its creators. As the name implies, the intent of the strategy was to drive a wedge between science and its natural (materialistic) roots:

Design theory promises to reverse the stifling dominance of the materialist worldview, and to replace it with a science consonant with Christian and theistic convictions (The Wedge).

The Wedge proposed a three-phase plan of action: (1) scientific research and writing, (2) publicity, and (3) cultural confrontation.

Phase 1 has not been successful. No research supporting the Intelligent Design model of creationism has ever been published in a peer-reviewed journal.

Michael Behe, although one of the most prolific writers and proponents of Intelligent Design, testified to the lack of research at the historic trial in Dover, Pennsylvania:

There are no peer-reviewed articles by anyone advocating for intelligent design supported by pertinent experiments or calculations which provide detailed rigorous accounts of how intelligent design of any biological system occurred (Only a Theory, pp. 178-179).

Behe also testified that the darlings of Intelligent Design – the blood clotting cascade, the immune system, and the concept of “irreducible complexity” – had no peer-reviewed support.

And unless you count the Discovery Institute’s own research in its own journal, there is still no peer-reviewed evidence for Intelligent Design’s brand of creationism.

The Wedge’s phases 2 and 3 (publicity and cultural confrontation), however, have been quite successful.
Multiple court cases in many states framed the teaching of evolution in public schools as a “culture-war” issue. A magazine cover 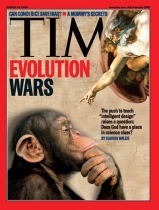 and a popular movie 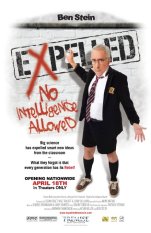 The message was clear and found its way into education bills across the country: Teach the controversy. Present both sides. Don’t you want our children to be critical thinkers? It’s “only” a theory.

Let’s follow this line of thinking beyond the topic of evolution….if you break out in a nasty rash, do you want your doctor to divide her diagnostic efforts between looking for a medical cause AND looking for a neighbor who might have cursed you with bad skin? If your house is sinking, do you call an engineer or a ghost-buster?

Although most anti-evolutionists believe that God blesses the earth with rain, they have no problem with teaching the water cycle in public schools. Only in the case of evolution do we find people lobbying for the inclusion of non-natural explanations in science class.

Here is Dr. Neil deGrasse Tyson in a recent interview, talking about the nature of science:

Once science has been established, once a scientific truth emerges from a consensus of experiments and observations, it is the way of the world. What I’m saying is, when different experiments give you the same result, it is no longer subject to your opinion. That’s the good thing about science: It’s true whether or not you believe in it. That’s why it works.

In my letter to Dan Patrick, I told him that I share his committed Christian faith and his high regard for scripture. I told him that there are a lot of us out here who see no conflict between science and faith. I offered to meet and discuss.

So far no invite.

This series is a chapter by chapter overview of Kenneth R. Miller’s Only a Theory, with my discussion and commentary.