It was, according to one reviewer, a male nerds’ night out—wearing their best Hawaiian shirts and tees boasting superheroes, periodic tables and jokes about Pluto. I was there, too, in my “peace, love, & space” shirt – Dr. Neil deGrasse Tyson, the beautiful Winspear Opera House in Dallas, and three hours of science nirvana.

Seated directly next to my husband and me was a ten year old boy. I know he was ten because when Dr. Tyson noted the number of kids in the audience, he jumped up and down, waved like a windmill and shouted “I’m ten! I’m ten! I’m ten!” In fact, Little Sheldon was on his feet or at the edge of his seat nonstop for three hours – shouting out answers to rhetorical questions, giving full-bodied and full-voiced agreement to Dr. Tyson’s talking points and laughing so loudly at the science humor I thought he would bust a vein. (The comments section for this Dallas Morning News review mentions this kid.  Three tiers in the Winspear and everyone heard him.)

To this boy and all the other enthusiastic kids present, Neil deGrasse Tyson is a rockstar. To the whole audience, really – the show had been sold out for months. Dr. Tyson is funny and engaging and talks like he’s your best friend (if your best friend is an astrophysicist rockstar).

But toward the end of the question and answer time, Dr. Tyson turned somber and confessed his fears about the people outside the walls of the Winspear that night:

I worry for America. We led the world, and the rest of the world would listen in.

Dr. Tyson isn’t the only leading scientist who is worried about America.
Here is the 2013 winner of the Nobel Prize in Medicine, Randy Schekman:

Science ignorance is pervasive in our society. These attitudes are reinforced when some of our leaders are openly antagonistic to established facts.

Happily, most Americans believe that smoking causes cancer – only four percent are holding out. Only six percent question whether mental illness is a medical condition and only eight percent doubt there is a genetic code inside our cells.

So far, so good – but things go downhill fast from there.

And a whopping 51 percent of adult Americans doubt that the universe began in the Big Bang.

A new Gallup poll (June 2014) corroborated the AP poll: 42 percent of Americans believe that God created humans, pretty much in their current form within the last 10,000 years.

And in that belief, Americans pretty much stand alone.

Of 34 industrialized countries (32 European countries, USA, and Japan), only Turkey ranks lower than the United States in acceptance of evolution.

If ID/creationism is allowed to share a legitimate scientific spotlight with evolution, the very foundation of the scientific method is undone.

Is that a problem? What’s the harm in remodeling the way we “do” science?

Does evolution seem to be random and meaningless? Does Intelligent Design/creationism bestow meaning and purpose to creation and to humans particularly?
No worries – just pick the position you prefer! Teach both! Let students decide!

Evolution is just the camel’s nose in this science remodel.

In fewer numbers than evolution-deniers (but growing) are the Americans who believe that vaccines are harmful, despite overwhelming evidence to the contrary. It doesn’t matter to anti-vaxers that science is not on their side. Anecdotal evidence and personal opinion against vaccination trumps all, even in well-educated anti-vaccine enclaves.

When personal philosophy is on equal footing with evidence (whether with evolution or in medicine), reality doesn’t really matter.

Giants of modern science – Galileo, Newton, Einstein – all spoke about God. They speculated as to how God ordered things in the natural world, but never did they add God to a mathematical equation. God was never cited as the reason for the results of a formula or a step in a process.

…if there is one characteristic that has distinguished Western science from every form of inquiry in human history, it is its uncompromising insistence that nature itself must be the source of answers for questions about the natural world (p. 197).

When God is pushed into the gaps of what we don’t know or don’t understand about the natural world, science stops. Why look any further?

The answer is God. 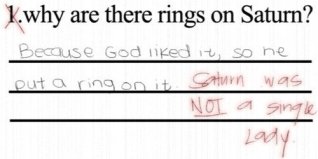 If special design is the answer for the complexity found in living things, why study more? There are no patterns or relationships to discover.

And the massive amounts of genetic data collected over the last two decades that indicate the interrelatedness of all life? Just an illusion, no need to develop the new medical treatments indicated by those findings.

Traditionally, a new discovery is put out to the open market of the science community. Hypotheses are formed; experiments are conducted. False conclusions are eventually found out – science self-corrects. Over time, findings about a discovery stabilize and a framework of understanding is constructed. Although refinements may be made, once a framework reaches this level, it is considered fact. This framework is called a theory – (atomic theory, gravitational theory, germ theory, and evolution theory are examples).

In the science remodel advocated by Intelligent Design/creationism proponents, science does not need policing. If an idea has value to a significant number of people, that is enough to define the idea as real science. No research or confirmation is needed.

Evolution tells us that we have a history on this planet, a history we share with every living organism (p. 220).

How ridiculous to make evolution the enemy of God. What could be more elegant, more simple, more brilliant, more economical, more creative, indeed more divine than a planet with millions of life forms, distinct and yet interactive, all ultimately derived from accumulated variations in a single double-stranded molecule, pliable and fecund enough to give us mollusks and mice, Newton and Einstein? Even if it did give us the Kansas State Board of Education, too.

Elegant, brilliant, creative, divine. As a believer in God, I find nothing in that description to fear.

This series is a chapter by chapter overview of Kenneth R. Miller’s Only a Theory, with my discussion and commentary.