Here I am a few weeks ago at the Royal Tyrrell Museum in Drumheller, Alberta, Canada! 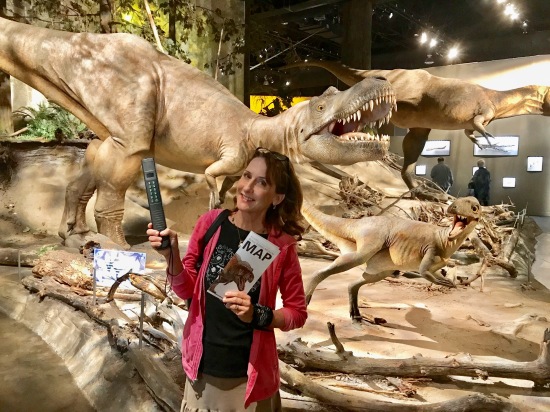 From this beginning point, I worked my way through the “intro” halls, all the while getting pumped for the really good stuff the Royal Tyrrell holds – enormous tyrannosaurs, elaborate (are-these-real??) Disney-like horned and frilled dinosaurs, and herds of T.Rex-sized duck-billed hadrosaurs.
But first, we were routed through a room dedicated to mining because coal and oil are important to this part of Canada. In this room were nods here and there to some good chunks of petrified wood and other unintentional finds discovered during the search for fuels.

And there he was.

Not often do I literally stop in my tracks, but I did. And whoa.

Right in the middle of the room was a dinosaur fossil like you’ve never seen before. Not skeletal remains. Not a two-dimensional imprint. Not even dried up and mummified.

But a 110 million-year-old dinosaur almost exactly as he would have appeared in life.

A NatGeo photographer  called it the most impressive fossil he’s seen in his life:

It was like a Game of Thrones dragon. It was so dimensional, like a prop from a movie.

In life, this plant eater was eighteen feet long and weighed 3,000 pounds. He was plated in spikes and also sported two impressive twenty-inch spikes on each shoulder. He was found by an excavator operator six years ago, but did not make his public debut until May 2017.

He is a nodosaur, an armored cousin to the club-wielding ankylosaurs. (Here’s a link to a stunning 3-D virtual tour of the dino by NatGeo).

And – breaking news – it was just announced a few days ago that this nodosaur is a new species, the first of its kind to be discovered. He is the 110 million-year-old new kid on the block.

The Mona Lisa of Dinosaurs 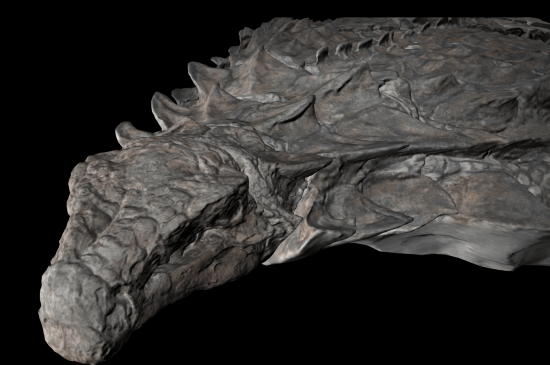 Researchers believe he was swept down river by a flood, then out to sea where he quickly sank, belly-up. He settled into the impact crater with his back supported and was covered in sediment. Minerals infiltrated his skin and armor. Here’s Mark Mitchell (the museum technician who spent more than 7,000 hours chipping rock from the specimen):

It will go down in science history as one of the most beautiful and best preserved dinosaur specimens–the Mona Lisa of dinosaurs.

Standing just inches from this dinosaur, face to face, I was overwhelmed by these two thoughts:

This animal is REALLY OLD and living things have changed A LOT.

Armadillos for Supper and Deep Time

About 180 years ago, a young Charles Darwin had those same two thoughts on his famous round-the-world trip aboard the Beagle. In Argentina, Darwin had been eating a local delicacy – armadillo roasted in its shell. In this part of Argentina were also found fossils of a huge animal, now called a glyptodon.

Glyptodons were extinct. And glyptodons looked just like enormous armadillos.

To Darwin, it was no coincidence that the little armadillos he was eating looked very like the giant glyptodon fossils found in the same geographical area.

A few scientists in Darwin’s day thought that life on earth may have changed, but Darwin was the first to advance an idea of “how” the change happened.

Although Darwin is most famous for his “tree of life” – all living things are related to each other – he articulated another concept that made the tree make sense: deep time.

In the case of the modern armadillos and the extinct glyptodons, Darwin concluded that one species had replaced another, not geographically, but over an immense amount of time.

In Darwin’s day, this was a radical idea.

Today, even the most ardent young-earth creationist will concede that species have changed – just a bit – in order to meet environmental challenges. Creationists term these adaptive changes “microevolution” (not a term recognized by biologists). But creationists maintain that adaptive changes never result in a new species: finches remain birds, despite changes in beaks.

Creationists (whether young earth or old earth) do not accept “macroevolution” (another unscientific term) in which a species gives rise to other new and different species. Like most of Darwin’s nineteenth century contemporaries, modern literal creationists believe that life on earth is pretty much the same as it has always been.

Evolution Before Your Very Eyes

Here is Henry M. Morris, writing for the popular Institute for Creation Research:

First of all, the lack of a case for evolution is clear from the fact that no one has ever seen it happen.

This argument is a favorite of creationist organizations like ICR and Ken Ham’s Answers in Genesis.  However, the “no one has ever seen it happen” argument fails to account for deep time, and furthermore, it is simply not true:

This is where Charles Darwin’s game-changing concept of deep time enters the picture.

And it then it becomes clear. Species do not change suddenly in big flashy events. A modern bird never hatched from a dinosaur egg.

Species give rise to new species because small changes accumulate over deep time.

The Vast Abyss of Time

Awarding-winning podcaster Krista Tippet (On Being, NPR) interviewed Adam Gopnik (New Yorker magazine) about a common thread in his writing – a kind of ongoing dialog with Charles Darwin. Gopnik speaks beautifully, almost lyrically, about intersections of faith and science and culture.

Deep time is a recurrent theme:

One of the things that gives Darwin’s life and his work its enormous, almost tragic, pathos is that he became acutely aware of (time). Biological evolution only operates and only makes sense if you’re able to open your mind up to geological time. The vast abyss of time.

Over the deep-time history of our earth, more than ninety-nine percent of species that have ever lived have gone extinct. Yet, we are surrounded by a dizzying diversity of life.

Things were very different  in the past.

(Hillsong United “So Will I“) 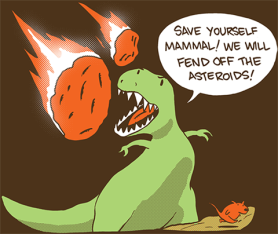