May 27, 2022 By JanetKRay.com in Prehistoric Planet Leave a comment 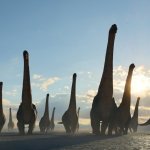 “Answers” Magazine was the Victorian equivalent of The Batchelor, I suppose.

A contributor to the magazine, circa 1892, posted his Hot Sports Opinion regarding the types of “girls” men should avoid.

Turn-offs include girls who sneer, but that’s NOT the worst of it.

In the article entitled “Girls Who Frighten One”, it’s the dino-girls who are the scariest:

Another girl who fills one with fear is the one who suddenly springs upon you out-of-the-way information with respect to the fixed stars or the antediluvian animals …. there are so many things a girl should know…. That when you discover that she has, instead of being so occupied, been studying the anatomy of the plesiosaurus you feel she is a mystery beyond an ordinary mortal’s ability to fathom…

He goes on and on and on with so many words because this guy has a thesaurus and HE KNOWS HOW TO USE IT.

He sums it all up with something along these lines:

Girls who like dinosaurs are so scary they make you want to jump off a cliff.

(And yes, I know plesiosaurs are giant extinct long-necked marine reptiles not dinosaurs, but I didn’t want to risk scaring anyone with my wealth of paleo-knowledge.)

But if you are a guy OR girl who isn’t so easily frightened by the Mesozoic, you NEED to be watching the latest streaming on Apple TV+: “Prehistoric Planet.” Seriously, clear your schedule.

It is gorgeous. It is amazing. It is all the adjectives.

It is narrated by Sir David Attenborough, whose accent alone makes you feel smarter.