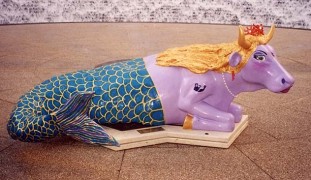 (I couldn’t find the original, but you get the idea)

The cartoon illustration elicited gales of laughter from the audience. The ridiculous creature was half cow/half whale. How could such a poor beast exist? The speaker was the late Duane Gish, arch-creationist debater. The place was Tampa, Florida in 1982 and Gish was in a high-profile debate with Dr. Kenneth Miller (a Christian, a cell biologist and author of Only a Theory and Finding Darwin’s God). Gish had long ridiculed the evolutionary prediction that whales had evolved from land animals. Gish pronounced the cow-whale critter an “udder failure”. But paleontologists from the University of Michigan (unknown to Gish) had discovered evidence that the transition from land to sea probably took place near India and by 1994, three intermediate fossils had been discovered. Today, we have multiple fossil examples of land-sea mammal intermediates.

In the early to mid 1980s, Kenneth Miller debated both of the prominent creationists of the time – Gish and Henry Morris. Dr. Miller recounts that Gish and Morris did not just have a problem with Darwin, they had a problem with all of modern science. The debates demonstrated that Gish and Morris were willing to discount modern physics, geology, and astronomy in order to support a literal reading of Genesis.  That willingness to jettison all of modern science, according to Dr. Miller, would become a real PR problem for the creation science movement in the United States.

Out of the poor showing by creationist heroes Gish and Morris in the debates and the 1988 US Supreme Court decision that outlawed teaching creationism in public schools, the Intelligent Design movement was born. The ID movement was meant to circumvent the anti-science vibes of the creationism science proponents:

They’ve done so not by changing their ultimate goals, but by writing a brand-new playbook, one that’s lighter and infinitely more flexible. With a wink and a nod to the Bible, they’ve set that heavy book aside and stepped into the ring unencumbered by its literalist baggage. ID, they maintain, is a scientific theory, not a religious conviction, and therefore the age of the earth doesn’t matter (Only a Theory, p. 41).

A Stone and a Watch 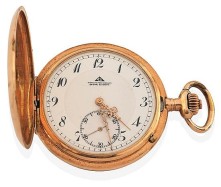 Before Darwin there was William Paley, an English clergyman whose 1802 work, Natural Theology, posed this familiar scenario:

If a man crossing a field comes upon a stone, the man might assume that the stone had lain there forever. But if a man came across a watch upon the ground, he would not assume the same. The watch, he reasons, must have had a maker. The complexity of the watch implies that its parts were designed and assembled for a purpose – telling time.

Paley’s watch analogy was picked up by the ID movement and expanded upon by Michael Behe, one of the leaders of the movement. Behe reasoned that complex biological systems could not have evolved because of a principle he termed irreducible complexity. This simply means that complex living systems could not have gradually come into being (as in evolution) because the intermediate forms would be missing key parts. And if a system is missing a key part, the whole thing breaks down.

Behe’s analogy was the mousetrap. In order for a mousetrap to perform its intended function, all component parts of the trap must be present and working. A mousetrap is designed to catch mice.

Take away just one part of the trap, and no mousies will be caught.

The Blood Clotting Cascade. The cartoonist Rube Goldberg was known for his clever drawings of complicated contraptions. Goldberg would string together an array of unrelated items to perform some sort of mundane task.

Blood clotting in the human body is often compared to a Rube Goldberg machine. Even the tiniest breach in a blood vessel sets off a cascade of events ending in the formation of a blood clot which plugs the leak. The blood clotting pathway consists of multiple steps, each triggering and amplifying subsequent steps. So precise is this clotting pathway that the absence of just one of the components in the cascade has a devastating effect. Individuals (usually males) that lack a factor in the blood clotting cascade will often bleed uncontrollably from even a small wound or bruise – a condition known as hemophilia. Until recent medical advances, missing just one factor in the blood clotting cascade meant hemophiliac boys rarely reached adulthood.

The blood clotting cascade is a favorite of intelligent design advocates:

Consider what this means: If each and every part of the system has to be simultaneously present for blood to clot, then the system could never have been produced by gradual, step-by-step evolution. It is indeed irreducibly complex, and therefore unevolvable (p. 33).

The Flagellum. The blood clotting cascade may be in the ID Hall of Fame, but the flagellum is the darling of the ID movement. Flagella are microscopic whip-like structures powered by a complicated chemical motor. Your body is host to billions of helpful bacteria which zip around your gut driven by their own little outboard motors – the flagella. An array of protein components (maybe as many as thirty, p. 36) must be securely in their places in order for a flagellum to operate properly. 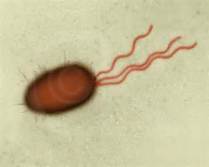 Remove just one of the components and our cute little bacterial outboard motor sputters to a halt.

By the logic of irreducible complexity, these components should have no function whatsoever until all thirty are put into place (p.36).

The human eye. The vast information encoded in our DNA. The mammalian ear. According to the intelligent design model, it would be impossible for these things to arise via evolution.

A Price Too High

For many people of faith, traditional young-earth creationism demands too high an intellectual price. It’s not that they are great admirers of Darwin – they’re not. They actually have a lot more in common with Ken Ham than they would care to admit.

The price of young-earth creationism is too high because

Enter intelligent design. Infused with scientific vocabulary and complex concepts, ID has no objection to evidence from physics or geology.

And, important to people of faith, ID assures that an intelligent author is behind it all, putting each protein, molecule, and structure into exact position. Intelligent design offers an alternative to natural processes that are perceived to be blind, cold, and uncaring.

Does irreducible complexity cast an ominous and final shadow of doubt over the theory of evolution?

I also want to consider philosophical issues of science and faith:

Does natural = cold and uncaring?

Can an evolutionist be a creationist?

What does the theory of evolution say about God? (Spoiler: nothing)

This series is an overview of Kenneth Miller’s Only a Theory with my discussion and commentary. My goal is to examine intelligent design and look at the science behind the antievolution claims of the ID movement. 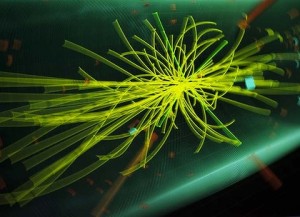 I believe that the heavens declare the glory of God.

I believe that day after day the cosmos pours forth speech and night after night the cosmos reveals knowledge.

I trust that the evidence and knowledge that is revealed is true because the Creator of the cosmos is Truth.