It must have been a sight.

London,1872. Tucked away in the depths of the British Museum, curator George Smith suddenly jumps up from his work and runs around the room, hooping and hollering.

And – to the astonishment of his colleagues – proceeds to strip down to his skivvies.

What would provoke such a display?

George Smith had been translating an ancient Assyrian tablet (7th century BC) when he came upon a story about a devastating flood: forewarned by the gods, a man built a big boat and filled it with animals and his family, and later sent out a dove and raven to check for dry land. All this in a story that far predated the book of Genesis.

The uncanny similarities between the flood story in the more-ancient Epic of Gilgamesh and the Noah story were worrisome to many believers in 1872. There is an even older Mesopotamian flood story (17th century BC), a prequel to Gilgamesh, which also mirrors the Bible story.

Just a few weeks ago, a 4,000 year-old newly-deciphered cuneiform tablet went on display in the British Museum.

The flood story contained in this tablet predates other Mesopotamian stories and the Genesis story.  The boat-building and animal-gathering instructions are more technical and detailed than in subsequent flood stories.  The biggest media splash, however, was the description of the boat – giant, made of rope, and round.

The boat described is an oversized coracle, used in ancient Iraq as water taxis. 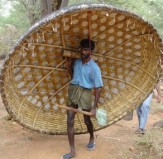 There is a line of thinking specific to many in the young-earth camp that attributes earth’s complex geologic history to a global flood as described in Genesis. From continental drift, to the Grand Canyon, to fossil layers, to the demise of the dinosaurs – a literal, global flood has been credited as the cause. 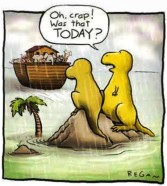 Can we find geological evidence to support such a catastrophic event?

Salt deposits. There are many massive salt beds on earth, some thousands of feet thick. We know how salt beds form – we can observe actively growing salt beds such as those in Utah. Salt beds form when salty water evaporates. Global flood proponents argue that the massive salt beds found throughout the world are the result of waters evaporating from “The Flood”. The problem with this explanation is that the salt beds are covered with thousands of feet of sediment, also said to be left by The Flood. Water from The Flood could not have evaporated enough to produce the vast amounts of salt and still be massive enough to produce the thousands of feet of sediment on top of the salt.

Grand Canyon. Every year, Answers in Genesis guides rafting tours of the Grand Canyon. According to the trip website, the guides

…give the biblical creation perspective on the formation of Grand Canyon, which stands as a testimony of the global Flood of Noah’s day.

I teach a “how to teach science” course to elementary education majors. In our soil lesson, we fill a glass jar – half soil, half water – and shake the jar vigorously until it looks like chocolate milk. We let the mixture settle for a few hours and this is what we see:

In geology, this phenomenon is called fining upward. When flood waters recede, we can observe a “fining upward” sequence in the layers of soil that are laid down by the floodwaters – coarse layers at the bottom, getting finer and finer toward the top.

If a single catastrophic flood – a single surge of rushing water – was responsible for carving the Grand Canyon, we would expect to see coarse layers at the bottom of the canyon, with finer and finer layers to the top. But that is not the case.
Deposition in Grand Canyon is a series of alternating layers – fine, coarse, fine, coarse, fine, coarse, and so on. Some of the alternating layers are larger than others. Now, throw multiple layers of limestone (never found in large flood deposits) into the mix, and Flood explanations for the Grand Canyon are in serious trouble.

Fossils. If a global Flood was responsible for the layers of fossils we observe today, what should those layers look like? Waters turbulent enough to rip up and move continents would churn all unfortunate non-ark animals as well as the bodies of previously deceased animals into one big animal-soupy concoction. There would be no orderliness to the fossil record; instead, we’d have the paleontological equivalent of a scoop of rocky road ice cream.

But that is not what fossil layers look like. In very old rocks, we find fossils of trilobites. In later rock beds we find dinosaurs. Later still, we find mammoths and other mammals…and humans. Flowering plants are found in newer rocks, but not in older rocks.

Geophysicists William Ryan and Walter Pitman have documented scientific evidence that there was an enormously catastrophic flood in the middle east about 7,500 years ago. There is evidence that as sea levels rose following an ice age, the Mediterranean Sea overflowed and deluged the Black Sea basin. Ryan and Pitman estimate that waters could have rushed through this channel with forces greater than Niagara Falls, with water levels rising six inches per day.

In addition, there are written records of catastrophic floods in Mesopotamia that date back to 2900 BC. These accounts coincide with observable flood deposits in that area.

Whether they were Neolithic farmers 7,500 years ago or Mesopotamians 5,000 years ago, the flood refugees would have thought the world was ending. From their limited perspective, the whole world was under water.

It is reasonable that ancient Babylonians would pass down stories of a catastrophic flood and that these stories would find their way into the literature of the people.

It is also reasonable that their neighbors, the Israelites, would have this story.

Where the Israelites depart from their near eastern neighbors is theology.

To our twenty-first century minds, it’s hard to fathom not being able to predict or even explain natural events like hurricanes, earthquakes, and floods.

Ancient people told stories in an attempt to understand.

The flood stories of the near east (including Genesis) have many shared elements: building boats, collecting animals, judgment, destruction, starting over.

But that’s where the similarities end.

The gods in the Atrahasis and Gilgamesh Epics were angry and revengeful. Humans were created to be slave labor for the gods. The humans rebelled and made so much noise it kept the gods awake.

The God of Israel is just. He sends the flood because humans chose evil and rebelled against him.

The gods of the Atrahasis and Gilgamesh Epics gleefully wiped out everyone. The gods demanded that humans respect distance and boundaries.

The God of Israel saves, restores, and finally (and this is HUGE) covenants. This God, unlike the gods in those other stories, saves because he wants to relate to, live with, and LOVE people.

To argue about the shape of the boat, the extent of the waters, the uniqueness of the story, dinosaurs on the ark or drowning in the flood, or to twist geology impossibly – ALL of these miss the point:

What this stilted literalism does, in its efforts to take the story seriously, is often to miss the point of the story. This story was a major leap forward in human consciousness, a breakthrough in how people conceived of the divine, another step toward a less violent, more relational understanding of the divine.

but then goes somewhere different.

Somewhere better. (What is the Bible? Part 2: Flood).