It has been a year since the showdown between Bill Nye “the Science Guy” and Ken Ham “the Six-Thousand Year-Old Earth Guy”. Bill Nye caught a lot of flak from scientists for debating Ham because a “debate” implies two equally credible options. Even the BioLogos Foundation (dedicated to an evolutionary understanding of creation) discouraged the Ham/Nye debate because debates imply that you must choose between evolution and faith. 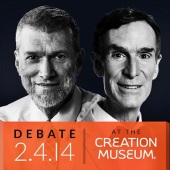 When the Institute for Creation Research scheduled their November 2014 anti-evolution “Origin Summit” on the campus of Michigan State University, their first move was to organize a debate. Unfortunately for the group, the science faculty banded together and refused to participate in a debate with the creationist group.

Not only did the science faculty refuse to debate, they refused to comment publicly or on the record until after the event was over. The faculty of MSU steadfastly refused to elevate the status of creationism to science.
A few Michigan State students did, however, set up an outreach booth as a good-will gesture to the summit attendees. Even so, the student volunteers chose not to engage in debate.

We don’t debate evolution because it’s not debatable. It’s like debating the existence of Canada.

Certainly no scientist has been more maligned or been the subject of more unflattering caricatures than the author of evolution theory, Charles Darwin. But Charles Darwin wasn’t the only or even the first of his day to suggest that living things evolved from a common ancestor. Other scientists had suggested it, including Darwin’s own grandfather.

Darwin developed the theory of evolution in the late 1830’s, but he never published a paper– he planned to present it in one all-inclusive book. Meanwhile, another naturalist (as biologists were called at the time), Alfred Russel Wallace, had arrived at a very similar theory of evolution. Both Darwin and Wallace presented papers in 1858, but the papers were ignored. It was Darwin’s book On the Origin of Species published the following year that caused a scientific and cultural earthquake.

Darwin’s big idea eventually revolutionized science and became the foundation for all of modern biology. Darwin said that evolution occurred because of natural selection: living organisms vary, and some of these variations will better suit individuals to the environment. Individuals that are better suited for the environment will live longer and produce more offspring, thus passing down the traits to future generations. Beneficial traits are retained, useless or harmful traits disappear. Over time, a new species will emerge.

Darwin himself realized that there was a gaping hole in his theory: offspring obviously had a mix of their parents’ traits, but how were traits passed from parents to offspring?

Little cell seeds – that was Darwin’s answer. According to Darwin, each cell in the body sheds little cell seeds (Darwin called them “gemmules”). Little cell seeds from both parents blend together to form the offspring. Some gemmules are stronger, so they dominate over the others.

Big problem: if traits are blended in offspring, it would not be very long before beneficial traits are diluted out of future generations.

Darwin’s explanation of how traits are passed from parent to offspring was, in a word, wrong.
Lacking an answer to the problem of heredity, enthusiasm for Darwin’s theory waned.

Super Monk to the Rescue!

While Darwin was busy in the 1850s developing his theory and writing his book, an Augustinian monk was painstakingly carrying out detailed botanical experiments in Brno Abbey (now part of the Czech Republic).

The Abbey had a long history of scientific inquiry – specifically in the areas of agriculture and plant science. Gregor Mendel studied the inheritance of traits in pea plants – wrinkled or round seeds, yellow or green pods, and other easily identifiable traits.

(Raise your hand if you remember working out Punnett squares in school – you may thank Brother Mendel for that.)

After eight years, thousands of crosses, and meticulous statistical study, Mendel determined that traits are not blended in offspring but are inherited whole.
Mendel published his work in 1866, but no one paid attention.
Almost twenty years after his death, Mendel’s work was rediscovered, breathing new life into Darwin’s theory. Before long we discovered that DNA is the chemical that holds the information for traits in all living things… then off we went, full-steam ahead into the 20th and 21st centuries and the age of genetics.

We now understand that traits, inherited from parents, are combined in unique ways at conception. Unless you are an identical twin, you differ genetically from your siblings. In addition, mutations (copying mistakes in DNA) occur frequently, and these can change a trait. When humans or any living organisms are born with traits that better suit them to their environment, their chances for surviving and having lots of offspring increase.

Darwin’s “gemmules” idea was utterly wrong, but his theory of evolution by natural selection has stood the tests of time and countless scientific inquiries. Matt Simon, writing in Wired magazine said this:

Being wildly wrong is perfectly healthy in science, because when someone comes along to prove that you’re wrong, that’s progress. Somewhat embarrassing progress for the person being corrected, sure, but progress nonetheless.

What Makes Something “Science”?

Science theories explain. A science theory isn’t speculation or even an “educated” guess. A science theory is an explanation that fits the evidence. For an idea to gain the status of “theory” in science, it must be confirmed consistently by observation and experimentation. As new evidence is discovered, a theory may be adjusted or tweaked, but the underlying principles remain unchanged.

Gravity is a theory. The earth orbiting the sun is a theory. There’s also germ theory and molecular theory. And, of course, evolution theory. As precise as these are, they are still incomplete. We are still tweaking as evidence unfolds.

Science theories have predictive power. A good theory allows scientists to make predictions that will turn out to be roughly correct. When Darwin died, the fossil record was not nearly what it is today. And there certainly was no genetic evidence, much less mapping of genomes.

Yet – fossils of both plants and animals were found just where we expect they’d be found – just where Darwin’s theory predicts they will be found. For example, fish are found in older rock than are amphibians, and Tiktaalik (the famous fish to amphibian transitional fossil) was found in between.

The explosion of genetic data over the last two decades doesn’t just show apparent relationships between living things, it shows actual relationships. DNA evidence is the smoking gun – concrete evidence of the interrelatedness of all living organisms.

In courtrooms across the United States, as well as in state boards of education and textbook hearings, advocates have fought for creationism (and its science-y sibling, intelligent design) as an “alternative” theory to evolution in science classrooms.

Both young earth creationism and intelligent design claim that all life was designed and created specially, uniquely, and separately. If this is true, then all predictive power is lost. If every organism is self-contained, there are no patterns to discover. There are no relationships to discover. Any direction we look for new information is just a shot in the dark.

Kenneth Miller is a biologist, author of a best-selling biology textbook, and a Christian. As an expert witness in the landmark Dover court case, Miller argued that creationism and intelligent design have no place in the science classroom. If non-natural causes are considered legitimate science explanations, Miller reasons, then all science ground rules change.

Why bother to conduct an exhaustive molecular search through primate virus genomes to find the source of HIV if it was sent from God as a divine warning? Why study the physics of light if the rainbow is a phenomenon given to us by a “whimsical” designer (according to William Dembski, a leader in the Intelligent Design movement)?

Science is predictable and explainable because it deals with natural causes.
Young Earth Creationism and Intelligent Design can’t predict. They can’t explain. They aren’t science.

What Does the Theory of Evolution Say About God?

Darwin could not have imagined the vast and diverse evidence we have now that supports his theory.

Trying to do biology without evolution would be like trying to do physics without mathematics. 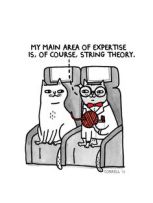